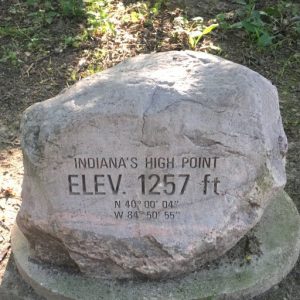 Adventures and thoughts of a slightly deranged mind.

The day started by waking up at two in the morning and trying unsuccessfully to go back to sleep. Hours later, when I was back on the road, it went pretty much like I expected.
Driving in circles in downtown Pittsburgh trying to find the parking garage.
When that problem was finally solved, arrangements were made for long term parking and I walked/rode the bike to the part of the Three Rivers Heritage trail that runs along the Allegheny.Riding to the Point on this trail I stopped a few times for pictures of downtown Pittsburgh and the two sports stadiums across the river. I was hoping that someone would be at the Point to get a picture of me at the beginning but that didn’t pan out. As I started east along the Monongahela it was necessary to ride around a large group of cyclists that (I know this from a Facebook posting) were doing some kind of ride for veterans. I expected to be swallowed by the swarm later in the morning but it never happened. They are either riding really slow or they are more into photo-ops than riding.
Shortly after passing the group, I lost the trail for the first of many times this morning. In fact, it seemed that I spent about as much time trying to find the trail as actually riding on it. That is an exaggeration, but the trail WAS very poorly marked and easy to get away from until about mile 132. (mileage for me, at least on the GAP, starts at mile 149 at the Point and decreases as I go farther). It took quite a while to escape the industrial sprawl branching out from Pittsburgh. Sadly, most of it consisted of empty buildings in various states of decay.
Early in the day most of the trail was paved. Later, it became the crushed limestone that I was expecting.
Once the trail started following the old railroad grade it became more enjoyable. At least twice waterfalls cascaded down the hillside to the right of the trail.
The original plan for the day was to ride about fifty miles to Roundbottom campsite. Everything was going well and there was plenty of time to make it when plans got changed. I had had a little problem with thigh cramps earlier in the day, but shortly after leaving West Newton it became a bigger problem. Lots bigger. After being unable to move for almost ten minutes, stopping about ten miles short of the day’s goal seemed like more than a good idea.
And so….
I am in my tent at the Cedar Creek campground. It’s a nice location with two AppalachianTrail style shelters although bugs have encouraged me to use my tent. There is one small drawback in the form of freight trains that pass nearby on at least an hourly basis. It’s cool. I like trains. And besides, after a long day that started much earlier than I wanted, I will probably sleep through them anyway.